You’ll never get an argument from me that “the older you get, the faster time flies.”

Can it be we’re already in the month of September and we’re in n the homestretch of the 2021 Hawthorne meeting? Yes, and yes is the answer.

We’re only three more weekends away from Hawthorne’s Night of Champion (September 25th) and closing night is just one live racing program later.

With this season’s Springfield and Du Quoin State Fair meetings in the history book, it’s the right time to see where we’re at in the ICF two and three-year-olds divisions pf both gaits.

In some cases, not much has changed but in others they have, and in a big way in a couple of cases. 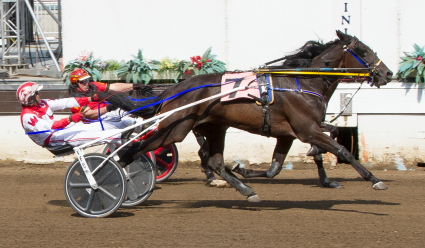 Sumbodygetdisfool (outside, Todd Warren) nailed Coco D’Lascito (inside J D Finn) at the wire of the Springfield final and vaulted up the ladder in the Kadabra point standings. (Four Footed Fotos)

I n the three-year-old colt and gelding trotting division prior to the State Fairs to looked like a two-horse race between Coco D’Lascisto from the barn of John D Finn and the Steve Searle stable’s Rndmnunpredictable for the division honors.

Each had victories in two legs of the Erwin F. Dygert Memorial stake series but then Sumbodygetdisfool (Todd Warren) mowed them down at Springfield and then went to Du Quoin and won the Pronto Don stake, also in come-from-fashion as well for conditioner Roshun Trigg, the leading trainer again this year on the Illinois Country Fair Circuit.

Archie Buford took the top spot as the leading driver in 2021 at the state’s county fairs.

The Rick Schrock trained Iwannarocknroll (Travis Seekman) only had 13 points in the Incredible Tillie Point Standings going into Springfield. Now the two-year-old filly has 63, thanks to her victory at the Illinois State Fair.  and has moved all the way up to fifth in that stake’s standings behind Rmissashlee (100), Lady Bombay (87), Dandy’s MNM (75) and Rollnroz (74).

Lady Bombay and Dandy’s DMN each won a division of the Director’s Award stakes at Du Quoin. While no points are given out from victories at the southern Illinois meet it does indicate that both fillies will be genuine threats come the Night of Champions.

The Mike Brink Stable’s Fox Valley Cairo (Ridge Warren) delivered the goods at both Springfield and Du Quoin and right now looks like the three-year-old male trotter too beat when the Kadabra showdown arrives. 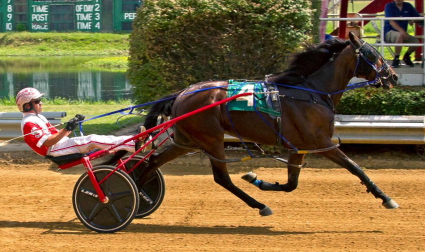 The Robert F. Carey Memorial stake series for three-year-old male pacers has been a crapshoot all season with Partyatartsplace, Ideal Big Guy and Bombay Bobby all winning one of the three series legs contested thus far, and things didn’t get any clearer after the state-fair

The Terry Leonard Stable’s Ideal Big Guy took the Springfield crown but faded to third at Du Quoin while the Springfield beaten favorite Ryan’s Loan Shark, from the barn of trainer Jim Molitor, came roaring down the Du Quoin stretch and made amends by coming home with the Dudley Hanover title.

Loulita came to Springfield with seven season wins in nine starts and left with losses at both Springfield and Du Quoin to Breeze At Sunset (Atlee Bender), right now the sharpest ICF filly trotter in the state with victories in five of her last six trips postward.

Kyle Husted’s Get E Up has rounded into top form at the right time, first ending the six-race winning streak of the Fox Valley Ozzy, from the stable of Rath Rath, in the Springfield championship, and then taking Du Quoin’s Governor Cup while the “Ozzy”, the Incredible Finale leading point earner (125), didn’t make the trip to the Southern Illinois state fair meet.

Awesome Aussie: The Australian-bred Braeview Bondi A ($5.00), patiently handled by driver Atlee Bender, made his Hawthorne debut an impressive one with a comfortable victory Friday night with a snappy time of 1:49.4.

Bender dropped the Erv Miller trained seven-year-old gelding into fourth in six-horse $12,000 Open Pace field in the early going and Casey Leonard smartly left enough from the outside post with Fox Valley Gemini to take the hole behind the 3-2 second choice.

Bobcat Bay (Ridge Warren) cut the fractions of 28 flat and 55.3 and midway on the backside Bender pulled Braeview Bondi out of fourth and the highly regarded pacer gradually gained ground on the leader with the 4-5 betting choice Fox Valley Gemini right behind him.

However, as they straitened out for the stretch drive Atlee pulled the ear plugs on the Aussie invader and Braeview Bondi responded, pulling away from the field and ending up more than one length ahead of “Gemini” at the finish line for his Shorewood, Illinois owner Bowie Racing LLC.