Homepage
You are here: Home1 / Mike Paradise2 / What You Saw Isn’t What You Got

By Mike Paradise
The idiom “What You See Is What You Get” doesn’t always apply in some cases. For example the original field posted a couple of days ago for Friday $15,000 Plum Peachy stake for ICF 3-year-old fillies didn’t materialize.
I went to sleep Tuesday night after handicapping a single 11-horse series field with the division’s dominant filly Char N Mark in the 10-hole. A few hours after I woke up I learned there was a Race Office snafu when Bucklegirl Bobette was erroneously put in a different race than her connections wanted, a start in the Plum Peachy.
Mistakes happen. I’ve certainly made my share and I’m sure I’ll make more.
Also, redraws for a horse not entered in the right race has been going on long before I came around and they’ll continue when I’m gone.
As far as Friday’s Plum Peachy draw blunder the racetrack had two options. They could have redrawn the race with 12 horses or they could have split the race into a pair of six horse divisions.
They chose the latter.
I’m sure the connections of the six fillies in the first division are very happy their horses don’t have to take on Char N Marg tonight and still have a $15,000 pot to shoot for. There may not be any frowns on the faces of the owners and trainers of the five fillies who will tangle with Char N Marg. They’ll face her in a small field with only one horse to beat to pick-up the $750 fifth place check. 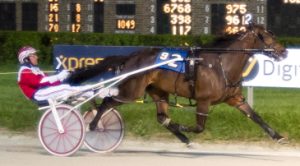 Char N Marg drew the outside race six slot but with only five foes that isn’t much of a concern. The filly has been dominant against other ICF fillies in her division for Quaid Racing of Chicago and will necessitate No Show Wagering on her race.
The Nelson Willis trainee will still be a prohibitive favorite (I’ve got her at 1 to 5) to make it four in a row with regular driver Casey Leonard and go 4-for-4 against other 3-year-olds.
The Sportsmaster filly out of the Jate Lobell dam Zip Up Your Pants has won 6 of 9 starts this season with her only losses coming against open company pacers. Her closest winning margin against ICF fillies was in the Violet Final two weeks ago when he was best by 2 and 1/2 lengths and eased up near the wire.
Char N Mark won her first leg of the Plum Peachy by six widening lengths. She blew away the field by five-plus lengths in a second leg division in early July and a week later was ahead by a half-dozen lengths in her violet elimination.
Ronald Knupp’s Whiskersonkittens is my top choice the first Plum Peachy division. The Kim Roth trainee raced in the rugged filly and mare Open Pace the last two starts against older mares and performed well with a second and a third place finish.
Whiskersonkittens (pp 2, Todd Warren) swept a Late Closer Series during Hawthorne’s winter meet back in January. Her challengers are Likeafireballshot (Jared Finn), Narcissistic (Pat Curtin), Bucklegirl Bobette (Kyle Wilfong), Lexington Lady (Bobby Smolin) and Fox Valley Gypsy (James Lackey). 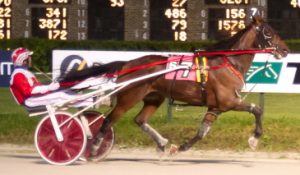 Easy Does It: The Mike Brink Stable’s Hail Caesar ($3.60) moved to the head of the class in the 3-year-old ICF male trot division with a convincing 4 and 1/2 length victory in last night’s $15,000 Erwin F. Dygert Memorial stake.
Driver Casey Leonard sent the Powerful Emotion gelding out from the seven-slot and dropped him into third as first Primed N Powerful and then Fear took turns taking the field to a 57.4 first half.
When Primed N Powerful came out of the pocket in the last turn Casey followed him up with Hail Caesar. By mid-stretch the outcome of the race wasn’t in doubt as Hail Caesar pulled away to his third win in a row for his Morton, Illinois owner Bill Wright.
Wrightwood came a long way to get second, one length ahead of Primed N Powerful.
The Beulah Dygert Memorial stake for filly trotters also turned out to be a one-sided affair as Vengeful took the $12,000 event by more than five lengths with regular driver Todd Warren.
Getting to the top didn’t come easy for the Kenny Collier trained filly and Vengeful ($5.00) had to fight off a number of challengers before posting a 1:57.4 winning mile for Providence West Inc. of Media, Pennsylvania.
Surviver DI settled for the bridesmaid honors while More Than Likely was third, beaten about 10 lengths.
http://harnessillinois.com/wp-content/uploads/2021/03/ihha_logo_white_wtext_v2-300x130.png 0 0 Mike Paradise http://harnessillinois.com/wp-content/uploads/2021/03/ihha_logo_white_wtext_v2-300x130.png Mike Paradise2016-07-29 12:57:332016-07-29 12:57:33What You Saw Isn’t What You Got