Homepage
You are here: Home1 / Mike Paradise2 / “Whiskers” Sailing Through a Solid Career

There’s an old nautical phrase that probably fits the ICF pacing mare Whiskersonkittens’ nights on a race track: “Steady as She Goes.”

The now seven-year-old Kim Roth trainee has had a rock solid career of racing for her Illinois owner and breeder Ronald Knupp. As she awaits Sunday’s featured $10,500 Open Pace for fillies and mares Whiskerdonkittens résumé reads: 30 lifetime victories in a little more than five seasons, a Night of Champions title, over $287,000 in purse earnings, and a consistent threat in the circuit’s Open Pace ranks.

Whiskersonkittens is a longshot in tonight’s sixth race headliner against a very good distaff field but the gritty ICF mare doesn’t know that, so she’ll be out there giving her best effort as usual for driver Todd Warren because she’s not just horse racing, she’s a “racehorse.”

I remember back when I asked Kim to describe the star of her barn and the Oak Lawn, Illinois native replied: “The filly is a beast. She loves to compete and just loves her job.” 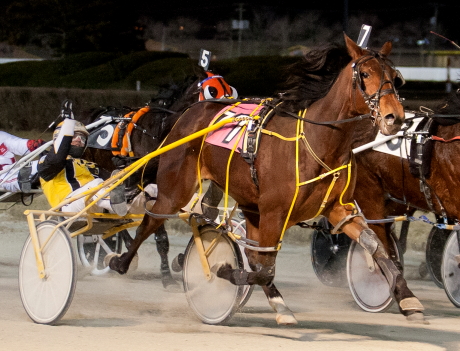 In the last four campaigns the home-bred Party At Artsplace mare has earned over $270,000, an average of nearly $68,000 a season, and has spent a couple of those years split between racing here in Illinois and out east at tracks like The Meadowlands and Pocono against some rugged open company distaffers.

Whiskersonkittens made a modest $13,674 in her freshman year at Balmoral Park. The filly did win four races but she wasn’t staked. That 2015 season was the last year of racing at Balmoral and with a contracting ICF stakes program ahead, along with an unclear future for Standardbreds in our state, some Illinois bred horse owners had a “wait-and-see” approach as far as making stake payments.

As a three-year-old “Whiskers” did get her shot at bigger pots and it turned out to be a wise move for her connections. The filly delivered a career best $100,929 in money won in 2016, with a hefty portion coming with a triumph in the $100,000 Plum Peachy Final on Hawthorne’s Night of Champions. She also captured an Open that summer and both were with Todd Warren driving.

The Roth trainee started off 2016 with a sweep of the Pretty Direct Late Closer Series, winning all three races with Bobby Smolin in her bike during Hawthorne’s winter meet.

”Whiskers” breakout year earned her the opportunity to go on the road after Hawthorne closed and she made stops at Hoosier, the Meadowlands and Philadelphia. The mare had a busy year at the age of four with 38 starts and 27 were out east, winning seven races and making over $71,000.

In 2018 she spent the entire season on the east coast, finishing first another seven times and banking over $51,000. Last year “Whiskers” took her lifetime mark of 1:51 flat to The Big M, where the mare raced until late June. After visits to Tioga Downs and Monticello Raceway in upstate New York she returned home to prepare for Hawthorne’s Tony Maurello stake. She won her elimination in 1:54 flat with Luke Plano driving, pacing a 26.4 last quarter. The hard-trying mare then dropped a half-length decision to Skeeter Machine in the 2019 Night of Champions final.

“Whiskers” will be at 25-1 first flash odds from the three post with Todd Warren. Inside of her are Pretty Image (Mike Oosting) and Dee Rocks (Ridge Warren), both Hawthorne Open winners earlier in the meet.

The odds of the Leonard Stable’s mare Windsum Brooklyn going off as the third longest priced horse in Sunday’s feature and at double-digits is about the same likelihood of yours truly fitting into his high school graduation suit from sixty years ago.

The second race winner Adios Amigos was a $15.40 “Mike’s Price Shot” selection and later in the card when another top choice Tappin Outamessage won the seventh race at $15.80.