Homepage
You are here: Home1 / Mike Paradise2 / Who Comes Out on Top This Time?

The two talented state-bred pacers put on quite a show last week and in the end the 2019 Two-Year-Old Pacing Colt of the Year Fox Valley Ren, skillfully driven by Kyle Wilfong, got past the front-stepping betting favorite He’zzz A Wise Sky (Bobby Smolin), in deep stretch to gain some revenge for his loss to the Don Filomeno home-bred in last year’s Night of Champions freshmen showdown.

Wilfong smartly had Fox Valley Ren sprint out from post five and took a quick lead last week while Smolin had to work harder with his pacer who was sent out from the 10-hole. He’zzz A Wise Sky eventually took over command soon after a 28.2 first panel while Fox Valley Ren enjoyed a covered-up pocket trip during a pair of rather slow 29.1 quarters.

Wilfong waited until his Sportsmaster pacer was inside the eighth pole to pull-out and try to overtake the 1 to 2 favorite and Fox Valley Ren did just that with a quick 26.3 last quarter, hitting the finish wire in 1:53.2 for trainer Nelson Willis. It was the good-looking pacer’s ninth win in 12 career starts for the Megan Rogers Racing Stable of Chicago.

He’zzz A Wise Sky defeat by less than one length snapped a six-racing winning streak for the Yankee Skyscraper homebred. However he could turn the table on his rival in tonight’s Cardinal. The youngster received a huge beneficial change in posts, shedding the 10-hole for the two-slot. Meanwhile Fox Valley Ren landed the six in the seven horse field.

Gals Share Spotlight: The Cardinal pace will have to share the Saturday public interest with the Department of Agriculture’s $43,300 Violet, the first major stake of the year for second season state-bred pacing fillies.

The filly to beat is last year’s Night of Champions titleholder Fox Valley Exploit (Kyle Husted), who went on to be named the division’s ICF freshman filly pacing champion. Another Sportsmaster product, Fox Valley Exploit came out raring to go as the three-year-old filly rallied to take last week’s first leg of the Plum Peachy in 1:55 flat. 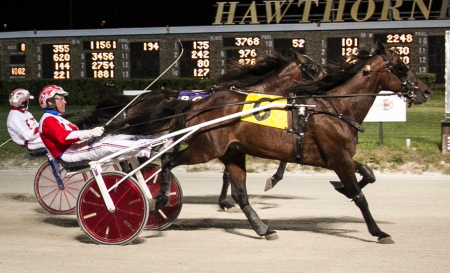 Trained and co-owned by her driver, “Exploit” drew the pole position a second straight time tonight. The Plum Peachy bridesmaid Sign Her Up (Juan Franco) is also in great shape with the two-slot. Last year’s Violet freshman champ Sleazy Gal, who was a close-up third last week, has the seven. Casey Leonard takes over the driving chores on the Erv Miller trainee now that Mike Oosting is back at Hoosier Park except for Sundays.

A trio of Late Closers Finals is also on the 13-race card. The very competitive $10,600 Dave Magee showdown is race three, Rock It Out (Casey Leonard) will be a prohibitive favorite to sweep the $12,800 Walter Paisley (race five) while Toxic Rock (Ridge Warren) figures to be a heavy public’s choice to make it 6-for-6 this season in the $14,600 Bob Larry Final.

Variety and Abundance This Weekend Problems Have Solutions
Scroll to top