Homepage
You are here: Home1 / Mike Paradise2 / Who’ll Rise to the Top Tonight?

When the $12,000 Open Pace rolls around Friday, Hawthorne players will find an intriguing race to handicap in part by what horses are in it and in part by those who aren’t.

Let’s begin with the latter. 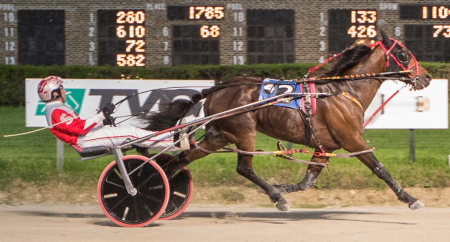 One of the likely favorites is the Terry Leonard stable’s Ponda’s Prospect, who is reunited with Casey Leonard tonight with the barn’s Fox Valley Gemini and Stuckley Dote missing. The 5-year-old gelding Ponda’s Prospect, did win one of two Hawthorne Opens on June 28th when he edged out Stuckley Dote, while his stable-mate Fox Valley Gemini took the other.

Rising To the Top (pp 4, Travis Seekman), one of two Perry Smith trained pacers in the race (Dakota Roadster, pp 8, is the other), also figures to get plenty of play at the betting windows after his 1:51.1 win in a high-end conditioned pace a week ago, and the fact that the 6-year-old gelding is also a past Open winner at the meet. The often fast closing Dakota Roadster will be driven by Luke Plano for the first time.

Trainers Kyle Husted and Nelson Willis each have a pair of combatants in the fifth race feature—Terror Of The Nite (pp 2, Kyle Wilfong) and Dash Of Danger (pp 7 Kyle Husted) for Husted and Jewel Maker (pp 1, Juan Franc) and Parklane Official (pp 3, James Lackey) for Willis. Nelson entered a third in the race, however Hot Rod Dylan was a vet scratch.

Dash of Danger has found the Hawthorne surface to his liking after spending the early part of this season out east. For that matter the 6-year-old gelding was strictly an east coast pacer in his first four seasons of racing as well.

In six starts at the Hawthorne, meet Dash Of Danger has been third or better in every outing and he beat Ponda’s Prospect in the June 12th Open II event. The Western Terror gelding comes off a wide mile in last week’s open, where Dash Of Danger still got third, beaten two and one-half lengths.

An interesting stat is that six of the eight starters have a career fastest winning mile of 1:51 flat. The exceptions are Parklane Offical, who paced one tick quicker in one of his earlier season wins at Hoosier, and Jewel Maker with a mark of 1:52.2 at Hawthorne, however he has paced in 1:51.1 in a race.