Homepage
You are here: Home1 / Mike Paradise2 / Wilfong Stable Looks to Double Up

Eight Late Closer champions will be crowned at Hawthorne this weekend and after the first two series legs, it’s clear that the Brett Wilfong Stable has a major threat in a pair of them, both with Kyle Wilfong in the bike.

In Friday’s $11,200 Daryl Busse trot series finale, the Wilfong Stable’s 4-year-old trotter Never Says That, is expected to be a prohibitive favorite and taking the first two legs of the series and in each he started from the furthest outside post in each.

The Trenton Watson Stable’s Broadway Mojo looks to be ever Never Say That’s primary threat, after racing first over to the Wilfong trainee in the last quarter of the mile last week, when the Issac Love driven trotter dropped a photo decision. 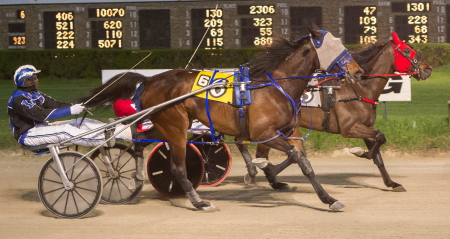 On Saturday’s $13,800 Bob Larry showdown, Wilfong has You’remyhearthrob going to the gate in search of back-to-back wins. The family’s homebred 3-year-old pacer lost a narrow head verdict to Sagebrush Shocker in the first leg, but held off his rival in comfortable fashion in round two, with a career best time of 1:54.4.

Et Tu Brute (Bobby Smolin), from the barn of Gerald Hansen, stepped up in his Bob Larry leg last Friday, with a 1:55.3 clocking a new fastest mile for the 4-year-old ICF gelding pacer and showing he could be a force to be reckon with in this Friday’s final.

The 26-year-old Wilfong, also has a live drive in Saturday’s $12,200 Mike Paradise championship after steering the 70-1 longshot Fox Valley Sinful to his huge upset and doing so despite the Joel Smith trainee leaving from the 10-hole with an 11-post trailer.

N.O.C. Candidates Named: The nominations have been posted on the Hawthorne web-site by the Race Office for the Night of Champions ICF stakes. They can be found at www.hawthorneracecourse.com under the “Horsemen” category.

The Robert F. Carey stake for 3-year-old state-bred pacing colts and geldings tops the list with 39 nominations, followed closely by the Plum Peachy for sophomore pacing fillies with 34. The 3-year-old Beulah Dygert for fillies has 22 eligible trotters, while the Erwin F. Dygert for trotting males lured 19 candidates.

The 2-year-old trots came up with adequate nominees as well. The Fox Valley Flan stake for fillies has 29 applicants while the Kadabra for colts and geldings saw 27 trotters nominated.

The first legs of the Night of Champion stakes will be contested next weekend, with the Carey divisions going on Friday, May 25th, the Plum Peachy divisions on Saturday, May 26th and the two Dygert events on spread out on the Sunday, May 27th program.

Casey on Fire: After the first two weeks into the summer meet, driver Casey Leonard is off to a sizzling start. The 40-year-old Harvard, Illinois native, has brought home 23 first place finishers in 68 drives, that’s a 33 per cent winning clip. No other driver at the meet as yet to reach double figures.