The two-year-old Cardinal pace and the first round of the Incredible Finale stake series are in the rear-view mirror and while we’re only two added money events into the freshman state-bred colt and gelding campaign the early outlook is that we have an evenly matched crop of youngsters competing.

Last weekend’s $42,290 Cardinal saw only two lengths separate the first five horses and the one-two finishers—Frontier Charley at 10-1 and Mekkas Big Guy (40-1) — two of the three longest shots in the race. 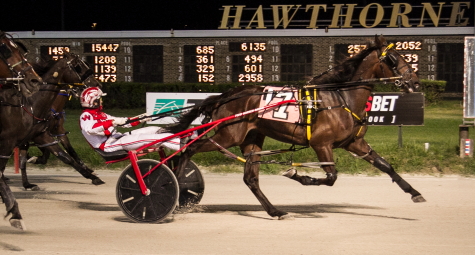 The battle in last week’s Cardinal was for second place as Frontier Charley (Todd Warren) proved best in the $42,950 two-year-old male pacing stake. Tonight the Jim Eaton trainee will open up as the 5-2 favorite in the second leg of the Incredible Finale stake series. (Four Footed Fotos)

A couple of weeks earlier in the initial leg of the Incredible Finale Ryans Loan Shark and Partyatmosasplace ended up one-two in their first steps towards September’s Night of Champions.

A week ago the Cardinal betting favorite at 3-5 odds was the first-time starter Well Basically from the Erv Miller Stable. The Sagebrush youngster finished third in his pari-mutuel debut and leaving from outside eight post didn’t help matters and tonight he landed the outside post in a nine-horse field of the Incredible Finale for his new driver Kyle Wilfong.

Well Basically was dropped at the end of the pack in the early going of the Cardinal and the juvenile was almost 13 lengths behind at a leisurely 29.3 first quarter. The heavy public’s choice did make up eight lengths in the (29) second quarter on the pace-setting Partyttmosasplace but he took a lot of air while being parked-out from the middle of the backstretch on. Well Basically eventually weakened and was passed by the first two finishers.

Well Basically is programmed at 6-1 in the ninth race feature but the horse was listed at 8-1 a week ago in the Cardinal so consider those early odds with a grain of salt.

Frontier Charley (pp 6.Todd Warren) is the early 5-2 favorite after his one-length Cardinal triumph and he does figure to get plenty of play. So likely will Partyatmosasplace (pp 7, Ridge Warren) the runner-up in the first leg of the stakes series. That winner, Ryans Loan Shark (pp 5, Cordarius Stewart) starts off at 5-1 tonight.

The 30-1 odds on Ashlee’s Fine Guy do seem to be more than a little harsh. While the $36,000 yearling purchase went off stride in his debut he did it on the move, indicating it may have been a speed break. The Ashley’s Big Guy gelding has since changed barns. The horse is now driven and trained by Kyle Husted. Note than the freshman’s siblings include Special Joe (1:49.4), Raging Cam (1:50.4) and Ashlee’s Fine Lady (1:53.2)

That takes to tonight’s second leg of the Incredible Finale. Will we see one freshman pacer emerge as the leader of this class? Or will go into August with the same murky division picture?

Another Gem Coming Up: The $10,500 Open Pace returns Friday night with the popular ICF pacer Fox Valley Gemini (2-1, Casey Leonard) putting his five race winning streak on the line. The sixth race event is an eight-horse field however Fox Valley Gemini has been assigned the 10-hole but he won’t be start alone out there. Castle Flight (7-2, Kyle Wilfong), winless since March, was allocated the nine-slot.

ICF Stakes Galore: On tap Saturday evening is round two of the Incredible Tillie stake series where Connie On the Go (Ridge Warren) looks to make it-three-for-three in ICF stake races.

On Sunday those always unpredictably freshmen state-bred trotters will duke-it out in the second segment of the two Dygert stakes, the “Beulah” for the gals and the “Erwin” for the guys.