It’s only the latter part of July but already tonight’s $50,000 Plum Peachy summer showdown can separate the “contenders” in the sophomore filly division from the “pretenders.” 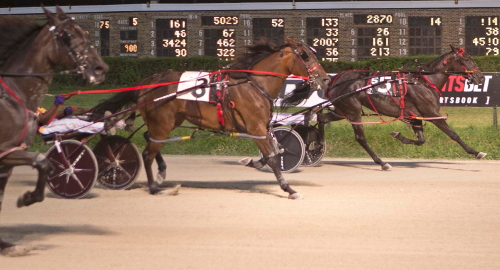 Kizzzmelikeumissme (inside), Apple Valley (No. 3) and Patttycake Moose (outside), the first three finishers in last week’s Plum Peachy Prep, are back for tonight’s $50,000 championship for state-bred three-year-old pacing fillies. (Four Footed Fotos)

When the James Molitor stable’s Apple Valley romped by more than six lengths in the Cardinal with a 1:51.4 clocking she moved to the head of the class in the division. However, last week’s Plum Peachy prep show that the Michal Perrin owned filly is not invincible.

Apple Valley was second best to the John Filomeno trained Kizzzmelikeumissme, with the help of a nifty drive by Kyle Wilfong, while the Gary Rath stable’s Pattycake Mooss had more pace than any other filly in the race in the last sixteenth of the mile.

“Wilfong gave my filly a terrific drive,” said Filomeno. “Kizzzmelikeumissme hasn’t been in her last few races. I’ve been treating her and she’s getting close to 100 per cent.”

Kizzzmelikeumissme’s only disappointing races came at Springfield in June and Filomeno blames himself for the showings. “I gave her a few months off after the winter meet and should have given her a qualifier or two but instead went for the money and raced her and she finished off the board for the only times this year.

“But she has bounced back and was more like her old self in last week’s prep.”

Kizzzmelikeumissme landed the seven slot tonight with Apple Valley and Pattycake Moose inside of her with the five and six slots respectively. The draw wasn’t kind to Rollnrozz. She received the nine-hole. 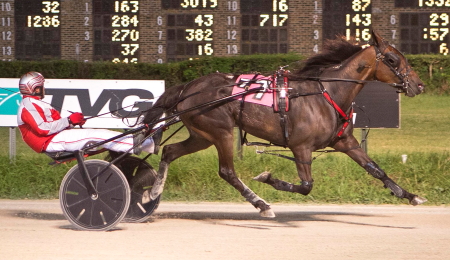 Favorites Inside: The other $50,000 championships tonight is the ninth race Beulah Dygert Memorial for second season state-bred trotting fillies.

Has luck would have it, the three favorites—Ironclad Creation (Atlee Bender), Lous Xanadu (Casey Leonard) and Funky Wiggle (Kyle Wilfong)—drew the 1, 2 and 3 posts, in that order.

Bevy of Elims: Eliminations for the Incredible Tillie will go in three divisions for ICF freshman pacing fillies, races three, seven, and ten. The first three finishers in each split advance to next weekend’s championships. They’ll be joined by a fourth-place finisher determined by a drawing.

The Fox Valley eliminations were split into two divisions—events four and eight on the card—with the first five finishers in each moving along to the two-year-old trotting final. Mike Brink’s Dawn Of Creations and Steve Searle’s Daisys Duchess are the early favorites in the first division while Curt Grummel’s Marvelous Mystery, undefeated in five outings, is the second group’s early betting choice. 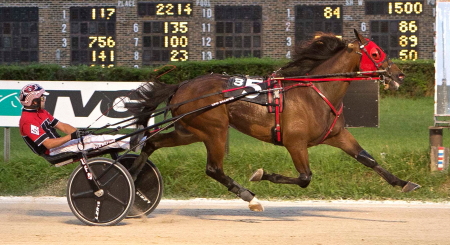 Lousdobb (Casey Leonard) the 4 to 5 post time favorite in the Dygert was eliminated right from the get-go when he went off stride soon after the start. That opened the door to victory lane for Fox Valley Cairo ($4.20) and the Mike Brink trainee took advantage of it, going right to the top and posting 1:56.2 front-end victory by two plus lengths over Mr Mizzou (Juan Franco). Good Boy (Atlee Bender) was third best.

Get E Up ($4.80), sent off at 7-5 odds, used a second over journey to wear down the pacesetting Fox Valley Ozzy (Casey Leonard) in deep stretch after the latter was pushed to a quick 55.2 first half.

Moving Along Were: Three elimination divisions of the $12,000 Incredible Finale for two-year-old state breds male pacers were contested Friday evening.

Kage Daniel ($7.80), given a two-hole trip by driver Todd Warren won the first split by about a length in 1:54 flat for trainer Tom Graham Jr. and owner Shelly Graham of Salem, Illinois. Also advancing to next weekend’s final were the second and third place finishers, the 3-5 favorite Fox Valley Patriot (Atlee Bender) and Ghost Shark (Travis Seekman).

The 4-5 favorite Fox Valley Langley, also driven by Kyle Wilfong, got his nose in front of Fox Valley Cayman (Casey Leonard) in the final stride to take the second Incredible Finale division in 1:53.4. The third-place finisher Illini Jetset (Atlee Bender) also made the final.

A Pair of $50,000 Pots on the Line Apple Valley and Funky Wiggle Shine
Scroll to top